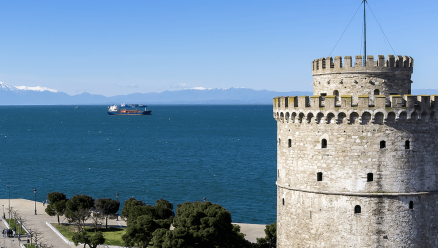 Thessaloniki is the second largest city in Greece and capital city of Central Macedonia, bearing all the structures that constitute a modern urban center. Additionally, its port being the second largest commercial port of Greece, and its location close to the Balkans, between the East and the West, are significant factors that contribute, both to its economic growth and its cosmopolitan characteristics.

It is known for its rich cultural and historic heritage as well as its lively lifestyle. The center of the city lies between a long and beautiful waterfront and the castles of the old town.

Thessaloniki is situated near many points of interest including the mythical Mount Olympus, the top touristic destinations of the Halkidiki peninsulas with Mount Athos and the remains of the Royal Palaces of the Macedonian Kings, famous for Alexander the Great. Thessaloniki is ringed by mountains with abundant wildlife. The area has pleasant Mediterranean climate and endless beaches.

There are plenty of good reasons as to why Thessaloniki is also considered students’ favorite city. Four State Universities and many significant Private Universities – Colleges, combined with the rich spiritual cultural and sports activity in the city, as well as the intense night life, are highly valued considerations for Thessaloniki’s popularity among Greek and foreign Students.

The quality of education, international recognition and collaboration with significant foreign Universities, the participation in European educational programs such as Erasmus, research projects etc. are factors that contribute to the acquirement of high standard’s scientific work.

Compare train, bus and flight options to Thessaloniki with OMIO.

The international Airport “Makedonia” (SKG Connects Thessaloniki with approximately 38 countries and more than 60 foreign cities with direct flights, as well as 35 cities and islands in Greece (direct flights and transit). The number of connections varies depending on the season. International Makedonia Airport handles around 6 million passengers annually.

For more information regarding Thessaloniki you may visit Thessaloniki’s Destination site and you can download the City Guide from here.

If you need additional information please complete the form below and an instructor will get back to you, as soon as possible!